Today, more than 3.7 billion people on the planet have access to the internet, that’s almost 40% of the population. The number was less than 1 % in 1995! We have come a long way in the past two decades. 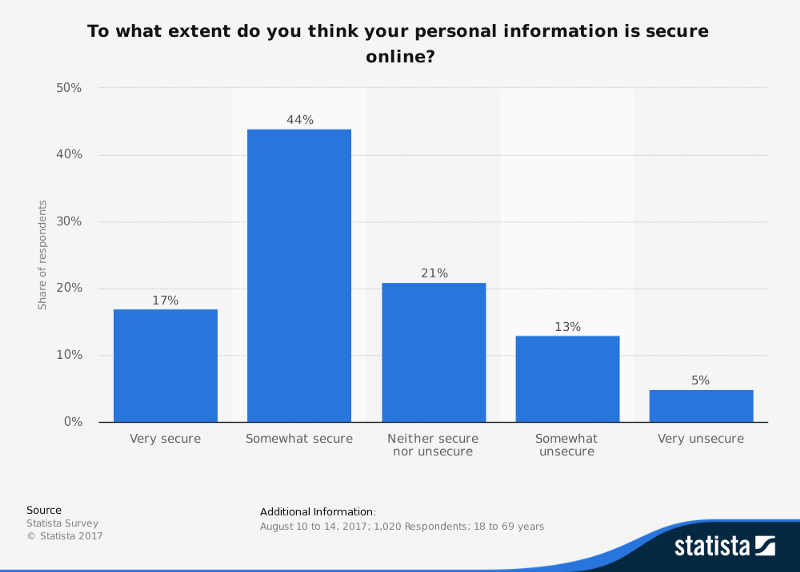 Today, more than 3.7 billion people on the planet have access to the internet, that’s almost 40% of the population. The number was less than 1 % in 1995! We have come a long way in the past two decades. The Internet is the largest source of information today and everyone wants to be connected to it all the time but being connected to the largest database comes at a price. For some the loss of privacy is a necessary evil, for others, it is abuse which they are trying to eliminate, which has increased the demand for a privacy guard app. Because of the novelty of the problem, little precedent can be invoked, still, policymakers and technologists and users are coming up with creative ways to solve the problem.

An August 2017 U.S.survey revealed that only 17 % of the internet users felt that their data was ‘Very Secure’. With news of massive data breaches coming out and companies owning up to laxes at their end, this number will surely go down. More and more people are realizing that some of the largest companies they had faith in couldn’t secure their data, creating a void that top privacy apps have filled.

As a response to another question to judge user’s faith in companies being able to keep their data safe, only 3 % said they completely trusted Facebook with their data. And Facebook is a place where people unknowingly share a lot. It doesn’t stop there as a lot of websites and applications use ‘Social Signs’ and since we ‘trust’ social networks to keep our data secure we readily use them to register on these websites and apps. As seen below, Facebook is the most preferred social sign and in spite of the fact that user trust sits at a mere 3 %.

Due to this vulnerability, which people are realizing today, they are most concerned about identity theft through online hacking and have started making use of privacy lock apps. Identity theft for stealing money is the most obvious reason but another alarming concern is the malicious use of one’s personal information, to humiliate, harass someone or damage their reputation in some other way.

A July 2016 survey of U.S.online users about online harassment through the invasion of privacy has revealed that 5 % of internet users in the United States had harm caused to them through the exposure of sensitive information. Online identity theft, device security and fake communications are some of the biggest fears parents have when it comes to their children’s online safety, calling for the need to use a reliable privacy guard app. Some 50 % of surveyed parents said they have already discussed identity theft with their children. Furthermore, an initiative called ‘right to be forgotten’ was backed by the EU court and forced Google to remove/amend results on request. This was a landmark decision and is paving the way for giving users back the rights to their data. With the internet growing unsafe every day, it becomes more important than ever to back up your online identity with one of the top privacy apps, such as Cove Identity, which acts as a privacy lock app and keeps your identity safe. The cove is the solution to all your digital identity problems.